I've been making a lot of pickles lately since our garden is giving us lots of cucumbers. So I thought I'd share with you this recipe for bread 'n butter pickles with a little kick! If you're a fan of that spicy-sweet combination, then I think you're really going to like these.

This recipe differs from a traditional bread 'n butter pickle recipe because of the addition of peppers and some spices that you don't add to the traditional ones.

Remove the ends of the cucumbers and cut them into ¼ inch slices. Chop all of the peppers (remove the seeds from the jalapenos!), cut the garlic cloves in half, and slice the onions. Mix them all together in a large bowl and pour ½ cup of pickling and canning salt on top. Add enough water to cover everything.

Add ice to the top of the bowl (it's supposed to make the pickles extra crispy) and let stand for 3 hours.

When you are ready to make your pickles, get out your water bath canner and wash and sterilize at least 10 pint size jars.  In a large pot, add the cider vinegar, sugar, and spices. Bring to a boil. Rinse and drain your cucumber mixture and add it to the boiling vinegar solution. Remove from the heat just before it returns to a boil so that you don't cook your cucumbers.

Put your cucumber mixture into warm, pint sized jars, wipe the rims, add the lids, and screw on the bands. Process the pickles in a water bath canner for 10 minutes. Remove and let cool for several hours.  If you have never canned anything before, you may want to read my instructions in the post Homemade Dill Relish.

For best flavor, don't eat the pickles for at least 2 weeks, if you can wait that long! 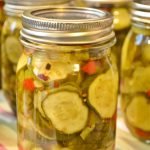 This recipe takes traditional bread and butter pickles up a notch!

For best flavor, don't eat for 2 weeks in order to allow the flavors to develop.

And if you have a lot of cucumbers like me, you may want to make some traditional Bread 'n Butter pickles and some homemade dill relish too!

Thanks for stopping by! We're renovating and preserving our family's 100 year old home place where we garden, complete a few DIY projects, and do some cooking. Please leave us a comment so that we'll know that you were here. END_OF_DOCUMENT_TOKEN_TO_BE_REPLACED