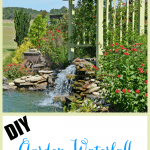 Hi everyone! I'm back with Part 3 of our series of how we built our garden waterfall!  If you remember in Part 2, Leo got the stones stacked and the water flowing to the waterfall. I just can't explain how exciting that was and what a sense of accomplishment we felt. We got cleaned up and went out for lunch to celebrate. When we returned home a few hours later, the first thing we noticed when we drove up was that the water had stopped flowing!

You see, the water level had dropped below the level of the skimmer where the pump is housed and immediately we knew that we had a major leak somewhere. We filled the pond back up and determined that we were losing water on the sides of the waterfall. It just wasn't all going back into the pond.

So the next day, the stones were all removed. Using one the liners, we drew it up against the legs of the arbor so it would channel all the water back into the pond. Leo and Jim carefully restacked the stones, creating a new waterfall. If you notice in the photo above, some of the stones are tilted forward so all of the water would fall back into the pond. This is not a job that we wanted to do, but we had to do it. And as far as we know, this was the only major mistake that we made. You can also see the round river rocks that we added on the sides, making that the third pallet of stones that we used for the whole project.

One of the really cool additions to the waterfall is these waterproof LED pond lights that Smartpond sent us.

The lights were tucked up into the stones and they look awesome at night! I'll be sure to include a photo of how they look at night in the BIG REVEAL!

Here's Leo placing the lights among the stones. There's no way to do this job without getting wet yourself!

Leo had also removed and saved the clumps of liriope in front of the waterfall, and we got it replanted.

One of the things that I did all by myself was to cut away the excess pond liner.  As you can see, I used a utility knife.

I found that this job was so much easier with a fresh blade in the cutter!

We added some small white decorative stones around the front edge. During all the construction, one of the bird houses had fallen from one side of the arbor so Leo climbed up on the rocks to remove the other one.

And this is where it landed! The last time you saw this ladder, it was on our Christmas Porch.

To replace the bird houses, we hung these solar lanterns on the arbor. You should see them at night!

Part of our plan to spruce up the flower bed where the waterfall is located included planting another one of these mophead cypress plants.  Five years ago, we planted four of these, but one of them died the first year and I wanted to get it replaced.  I had to pay a pretty penny to get one large enough to go with the ones I already had, but it was so worth it. I LOVE these plants because they add good color in this area during the wintertime.

We also planted two more Joseph's Coat climbing roses along the fence. I'm hoping I can keep the blackspot off these!

Two Carolina jessamine vines were planted on the back legs of the arbor.

They are already growing rapidly and are beginning to twine around the pickets on the arbor.

We've found that we love listening to the sound of the waterfall so much that we moved our Adirondack chairs from under the pecan tree to here. Leo thought we should give them a fresh coat of paint but I thought their chippiness blended better with the old arbor.

Some additional landscaping was done around the waterfall and I'll give you a better look at that during the reveal, but here you can see me spreading pine straw in the area.

We decided to roll in our old wheelbarrow to see how it would look here. It was inside the house as part of our Gardener's Christmas decor.

One of the last things we did was to add this pretty bronze heron spitter to the edge of the pond.

In order to get water to it, we connected  a smaller pump and ran the water through this UV pond filter which is designed to eliminate algae.  If you'd like to know more, our friends at Smartpond can answer all your questions about filters and pumps.

Stay tuned because this week I plan to show you everything in the BIG REVEAL! I can barely wait to show it to you!

Update: Click on any of the post titles below to see the final reveal as well as seeing how the waterfall area has changed through the past few years.