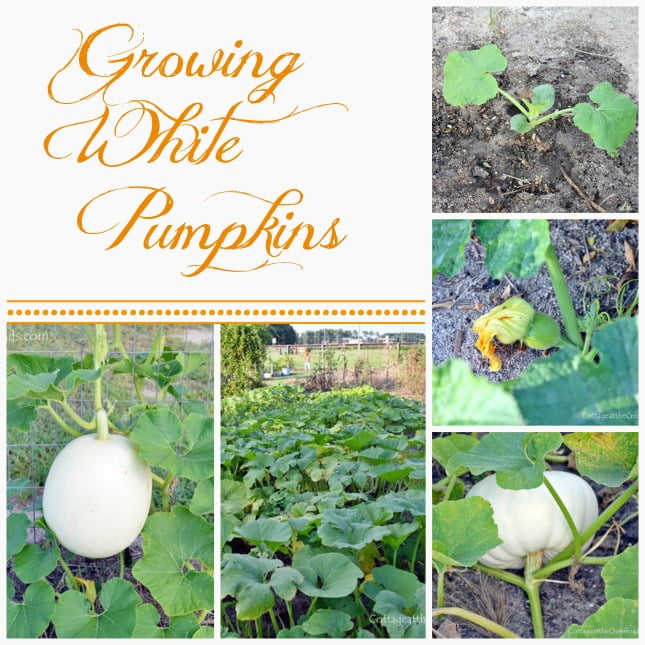 There was frost on the pumpkins yesterday morning, as the old expression goes. So I thought I’d share some reflections on our first year of growing white pumpkins. From the time that the seeds that we planted in July germinated and started coming up, I have been fascinated with the pumpkins. I guess that’s because the white variety is still somewhat of a novelty. Or maybe it’s because the vines grow so rapidly that you can see changes from day to day. 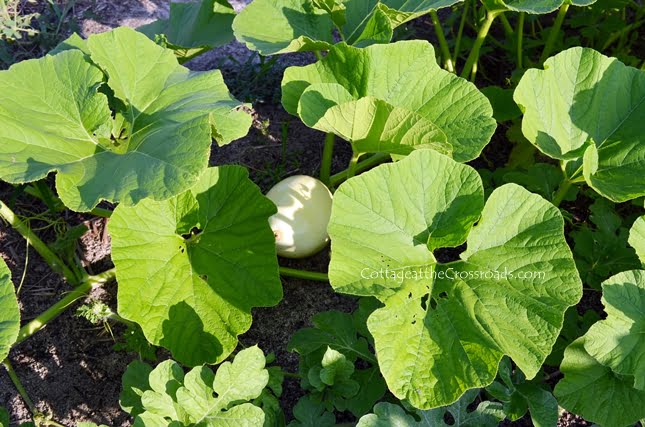 Leo and I learned a lot about growing pumpkins this year. We did some things right such as preparing the soil before planting. You can read about that in Leo’s post: White Pumpkins for Fall, Anyone?  We planted our seeds in mid-July, but next year we will move that date back closer to the first of July because pumpkins need 90 days to mature. 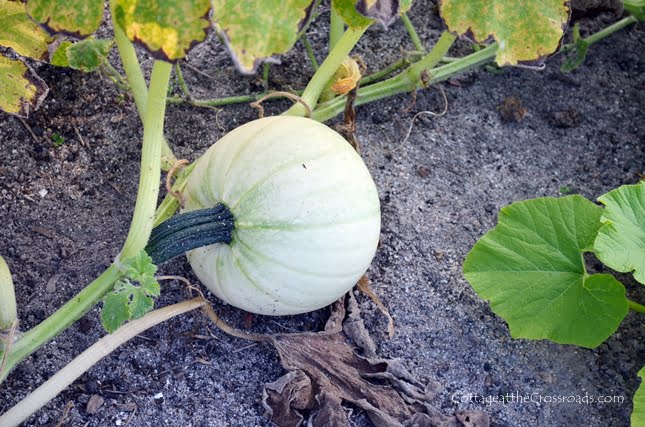 We planted 3 different varieties this year: Valenciano (Cinderella shaped) Polar Bear (really large) and Moonshine (long-stemmed). Although I like large pumpkins, I would not plant the Polar Bears again because their skin is smooth with no ridges. 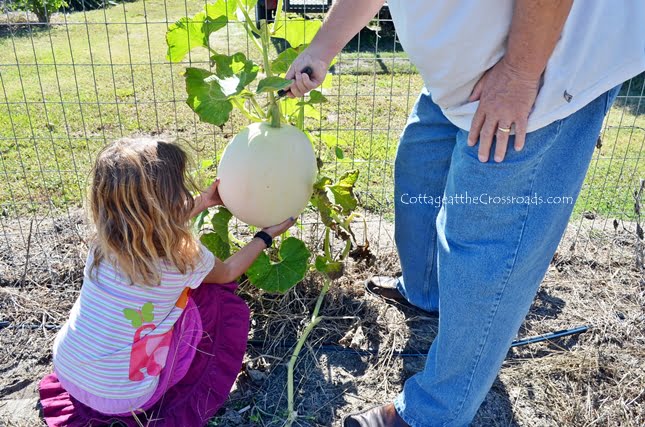 Here’s one of the Polar Bears which grew up on our fence, and Leo is cutting it for our granddaughter. We did find out that this type of  wire will definitely support the weight of the pumpkins as they are growing. 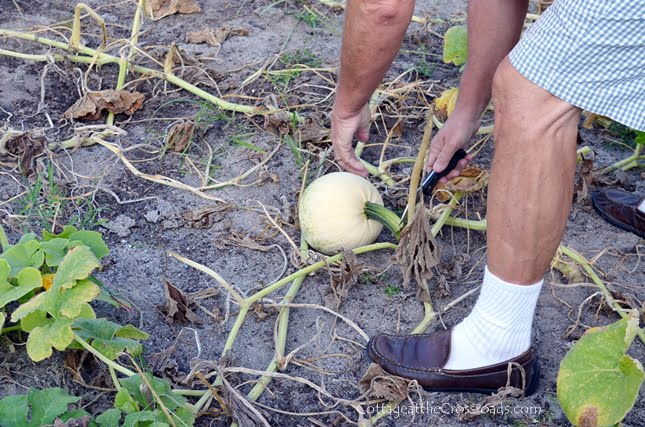 Of the three varieties that we grew, my favorite was the Moonshine because they have really long stems. See the one in this photo? 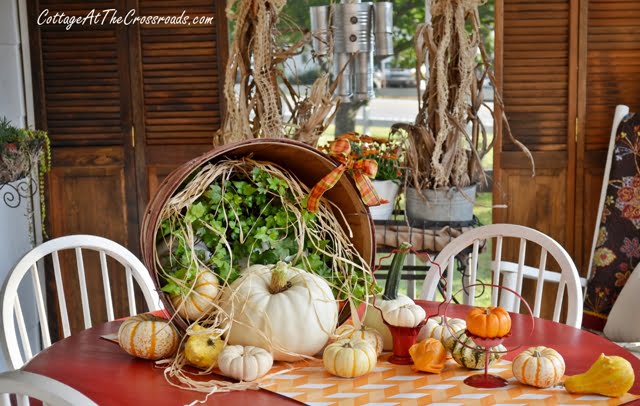 But I also like this Cinderella shaped Valenciano pumpkin that you see in this centerpiece, too! We will definitely grow both of these varieties again. 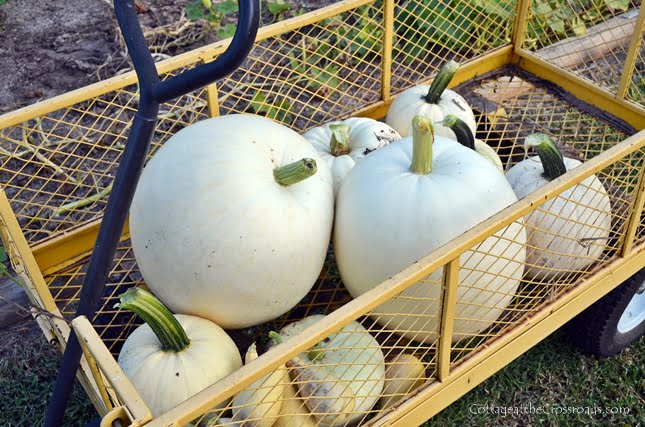 We had a great harvest for our first experience growing white pumpkins. This cart had our first haul out of the garden. 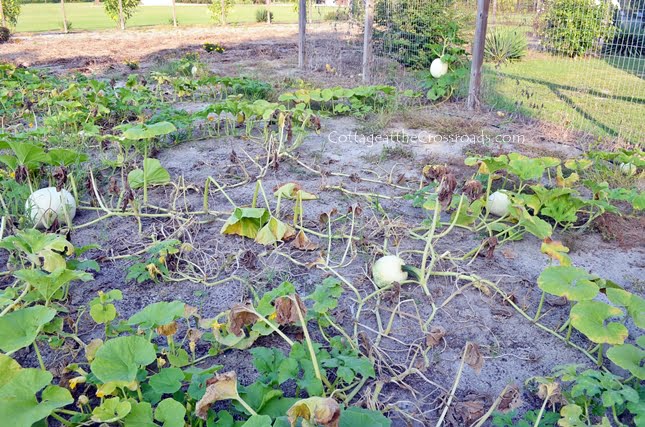 One of the things that we discovered was how much water pumpkins need. Wouldn’t you know that as we were growing our pumpkins, we had the driest August and September that we’ve had in a long time! Since we didn’t put a watering system to our pumpkins, I had to hand water those babies just about every day.  So next year, we will put a drip irrigation system in when we plant our seeds because it’s so hard to find the root of each vine when the leaves are large.  You really don’t want to water anything other than the main stem because too much dampness may lead to powdery mildew.  And we will add mulch to the pumpkin patch when the plants are tiny because before you know it, they become so large that you can’t add mulch without stepping on the vines!

How do you know when to harvest your pumpkins? Well, see how the vines are shriveling up in the photo above? When that starts happening and the stem starts changing color, that’s when you can cut the pumpkins from the vine.  But flowers kept forming and baby pumpkins were growing even into October. 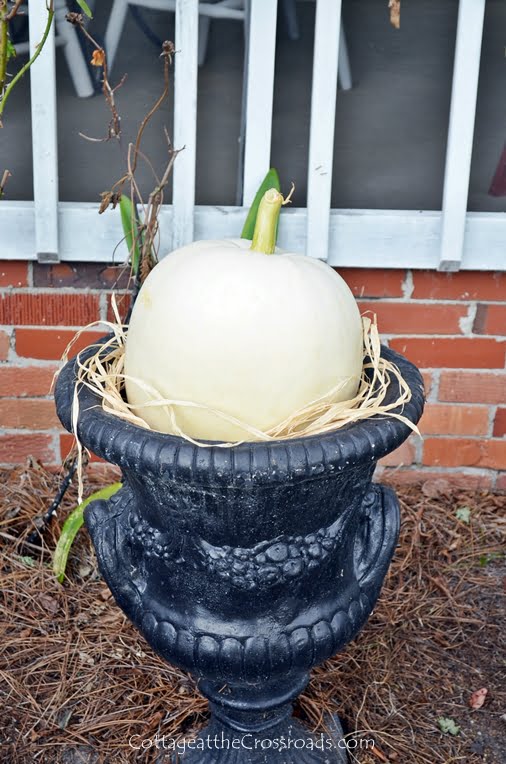 We had a lot of fun decorating with the first pumpkins that we cut. Here is one of the Polar Bears in a black urn. 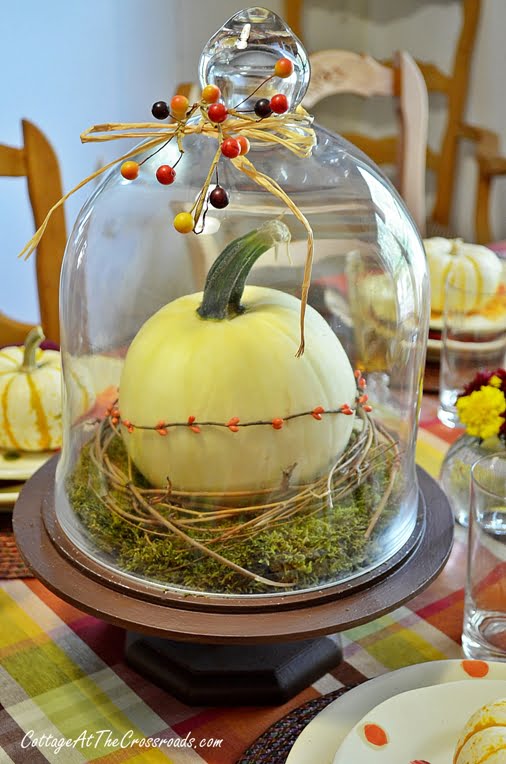 Here I’ve used one of the pumpkins as a centerpiece in our fall tablescape. 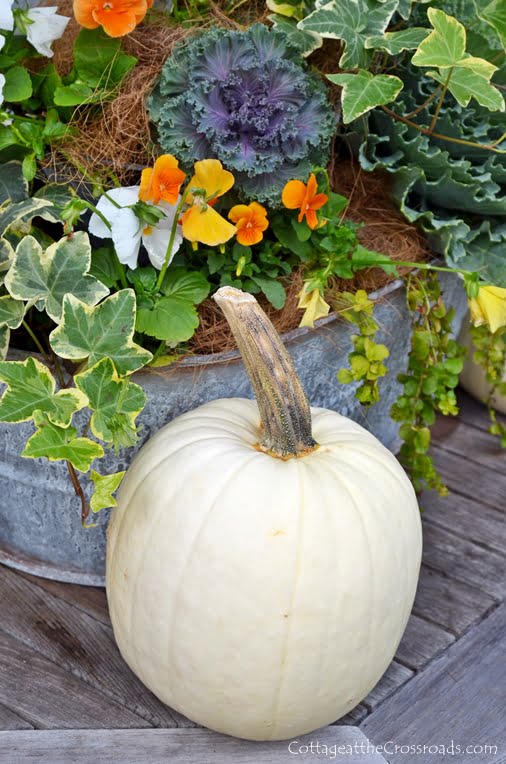 This one I used to add a little autumnal flavor to our deck. 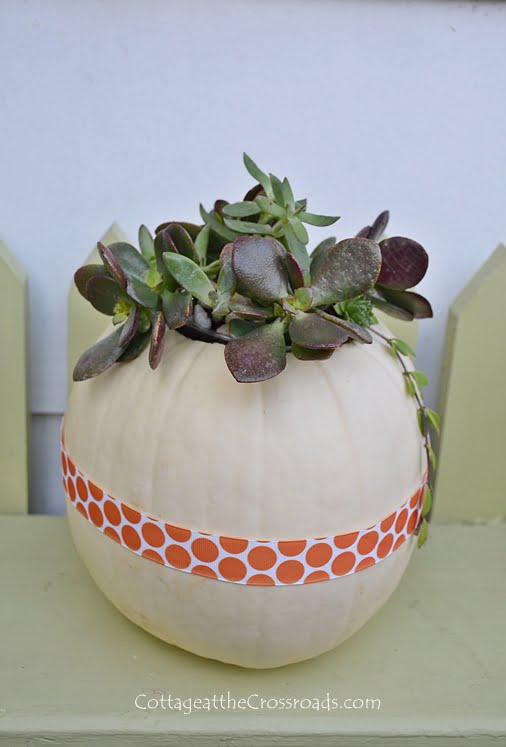 And a few days later, I turned it into a succulent centerpiece. Shortly after, we sent almost all the white pumpkins that we had to be used as decorations for a fall wedding. And then they went to a school where they were going to be painted. It warms my heart to know that so many other people enjoyed them as much as we did. 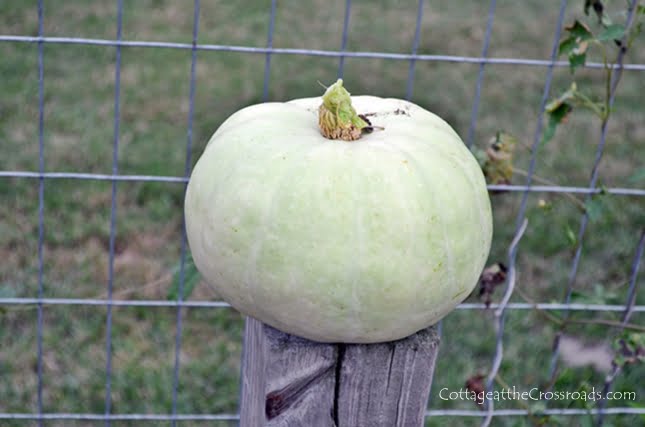 Well, all the vines have been pulled up and this little guy was the last pumpkin to come out of the patch. It was one of the later ones to grow, and you can see that it is still green. 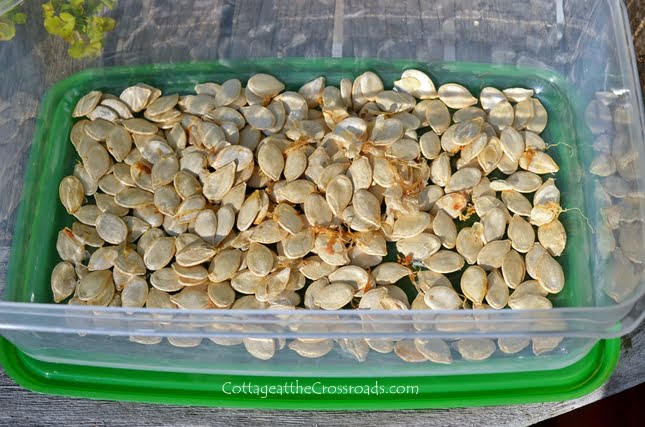 I saved the seeds from the pumpkin that I cut to use as a succulent centerpiece. It’s the one with the really long stem, and I happen to have one of the Valencianos on the front porch. I’ll save its seeds, too.  Since the Valenciano is an heirloom,  its seeds will produce white ones again next year. And because the Moonshine pumpkin is a hybrid, I may get some orange ones from its seeds. That’s ok with me because I love orange ones, too. And I’ve already decided that I’m ordering some seeds to grow some Jarrahdale and Chioggia pumpkins next year along with the peach colored ones (Galeux D’Eysines) with the warty skin!

All in all, I would consider our first attempt at growing pumpkins a success. We made a few mistakes, but we’ll try it again while making some adjustments.

The season to season challenge of growing a garden is what’s exciting to us.