It's hot and steamy but when I'm craving a sweet treat, I can't bear to turn on the oven, can you? So I put together this No Bake Blueberry Cheesecake with the last of the blueberries that came from our garden.

What's really good about this recipe besides not having to turn on your oven is that you can make it ahead, put it in these little jars, and refrigerate it until you're ready to eat it. These were a huge hit at our house and I'm sure they will be at yours, too!

These are the jars that I used for the dessert, and right now, they are on sale at Target. I love their squatty shape and their wide mouths, and although they seem a bit large for dessert, we had no problem at our house eating the contents of each jar!

After washing the jars, I mixed together 1 cup graham cracker crumbs with 2 tablespoons melted butter, 2 tablespoons sugar, and 1 tablespoon cinnamon.

Next I just spooned the graham cracker mixture into the bottom of the jars.

Then I mixed up this cheesecake pudding by following the directions on the package and then layered it on top of the graham cracker mixture in the jars. ( I used the sugar free version of the pudding but you could certainly use the regular kind as well.) At this point, I stuck the 4 jars into the fridge.

Now for the really fun and delicious part! I made a blueberry sauce by combining 2 cups of fresh blueberries, 1 cup water,  and 1 cup sugar. After letting it come to a boil, I continued to simmer it for about 10 minutes. To thicken it up a bit, I mixed 2 tablespoons of cornstarch with 2 tablespoons of water and added that to the blueberry mixture.

Now normally I would add a little almond extract to this, but I was out of it, so I added the next best thing I had on hand which was some Amaretto. That was a good call because it was a perfect compliment to the blueberries.

All that was left to do was to add a few sliced almonds and a little kiwi for garnish.

You can put the lids on the jars and refrigerate them until you are ready to serve and let me tell you, they are just as good the next day, too! You're gonna love the convenience of making these up in advance and you're gonna love the compliments that you'll get on this delicious, no bake blueberry cheesecake!

Stay cool, my friends, and here's the complete recipe!

No Bake Blueberry Cheesecake in Jars 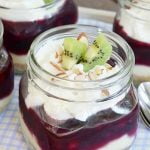 A delicious, no bake way to enjoy blueberry cheesecake!

For the graham cracker layer

For the cheesecake layer

For the blueberry sauce

For the whipped cream layer

The jars may be assembled up to 1 day ahead and refrigerated.