I'm sharing a recipe today that was simply a result of wanting to use up some items that I had on hand, and these open faced asparagus sandwiches turned out so well that I thought you might like the recipe. The sandwiches would be ideal for brunch, lunch, or a light supper.

This all came about because I was being indulgent recently when I purchased some of these canned biscuits.

You see, these biscuits are like crack for Leo and me. We like these for making egg biscuits for breakfast, but we have avoided these for over a year in our quest to eat more healthy. But I have found myself turning to comfort food to get me through the recent cold weather.

Well, one morning we did have one egg biscuit each which meant that there were some leftover biscuits.  So I put them in a baggie and refrigerated them for another use.

So yesterday afternoon I pulled them out of the fridge along with some sliced deli ham and swiss cheese that we had and the thought of making some open face sandwiches occurred to me.

So out came these little individual cast iron skillets that I had purchased months ago. They come preseasoned so I just added a small amount of olive oil to each pan and heated them up in the oven.

When they were nice and hot, I pulled them out and put a half of a biscuit in the bottom of each pan along with a few pats of butter and broiled them. I have found that these left over biscuits make great toast!

Next I layered a slice of ham  and a slice of Swiss cheese on top. So while rummaging around in the fridge, I pulled out some fresh asparagus spears, cooked them, and placed them on top of the cheese and stuck them back under the broiler to melt the cheese.

Thinking that the sandwiches still needed a little something, I  whipped us some homemade hollandaise sauce and poured it over the top along with a few shakes of cayenne pepper! Oh my! The hollandaise sauce was so rich and lemony and so, so GOOD!

The great thing about making these sandwiches in these little skillets is that you can move them to the table to serve.

If you notice, I made 4 of these sandwiches. Normally you would serve just one to each person along with some soup, salad, or fruit. But Leo and I were doing a taste test for you, dear readers! We ate all 4!

So delicious and such a happy marriage of flavors! It was the hollandaise sauce that made them so terrific. If you make these, don't be tempted to use the packaged mix of hollandaise because it's so easy to make your own and it is so much better! 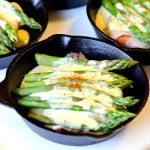 A quick and easy brunch, lunch, or light dinner dish!

For the hollandaise sauce

To prepare the hollandaise sauce

And as for the little skillets,  they make the perfect servers! I found mine months ago at a discount store located in Sumter, SC, but here is a  link to ones just like mine:  Old Mountain Round Single Serve Cast Iron Skillet - Set of 6 (affiliate link.)  Or you can buy the individual ones made by Lodge (affiliate link.)

And you can bet that when we have some fresh asparagus spears from our garden, I'll be making this dish frequently!