Today I'm sharing a very tasty pulled pork with root beer bbq sauce recipe that came from a blogger friends' new cookbook. Plus, I'm giving away one copy of the cookbook to a lucky reader!

This recipe made enough that I even froze some!

This recipe came from my blogging friend Valerie's new cookbook shown below.

Valerie blogs at Valerie's Kitchen. If you are looking for some awesome new recipes to try, you should hop over there and subscribe to her blog!

Last year she published a cookbook which I recently ordered from Amazon. It is filled so many recipes that I want to try.

I was having a conversation with Julie from the blog Redhead Can Decorate and she suggested that each of us try a recipe from Valerie's cookbook and post about it. And Valerie generously agreed that we could each giveaway a copy of the cookbook.

The cookbook contains so many recipes that I'd like to try but I was intrigued when I saw a recipe for pulled pork that you could make in the slow cooker.

And it contained what I thought was a unique ingredient.

Yes! ROOT BEER! Not only is the pork cooked in root beer but you also add it in the sauce! And let me tell you, that root beer makes the pulled pork so delicious!!!

For the Root Beer Barbeque Sauce

I must confess that I made a few minor modifications to the recipe because here in SC, we favor a vinegar based bbq sauce. You can find what I changed in the notes in the recipe card below.

First, to make this recipe, you need a whole boneless pork loin. Normally, pulled pork is made from a more fatty cut such as a pork shoulder or butt roast.

The recipe calls for a 3-3 ½ pound pork loin but mine was slightly larger and came from Sams.

You simply cut the loin into smaller pieces, season the pork loin with salt, pepper, chili powder and put it in the slow cooker along with some root beer. Let it cook on low for 6-7 hours until it's tender and falling apart.

Meanwhile make the barbeque sauce (which takes about 10 minutes) and refrigerate it until you're ready to use it.

When the meat is done, take it out of the slow cooker and shred it with two forks. Mix  some of the bbq sauce into the shredded pork.

Leo and I are declaring it the BEST pulled pork that we've ever eaten! That's quite a statement because we are located here in the heart of BBQ land and we've eaten our share of pulled pork sandwiches.

A great accompaniment is, of course, a cold mug of root beer! 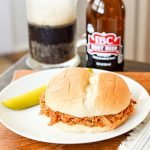 A delicious pulled pork recipe that uses a leaner cut of meat cooked in root beer.

For the Root Beer Barbeque Sauce

Additional notes by Jane: I added about 2 tablespoons  garlic powder to the pork loin as I was seasoning it.

I omitted the liquid smoke and onion powder (simply because I didn't have either) from the bbq sauce.

*Some links from this post are affiliate links. That means that I will earn a small commission if you purchase something after clicking the link. See more of our disclosure policy HERE.

The Foolproof Family Slow Cooker and other One-Pot Solutions cookbook is worth it just for this recipe alone.