You are here: Home / HOLIDAYS / Making Velvet Pumpkins for our Church Bazaar

I’ve been missing in action on the blog lately but for good reason. We’ve been making velvet pumpkins for our church bazaar for the past few weeks. When I say “we” I mean my 2 sisters-in-law and myself. 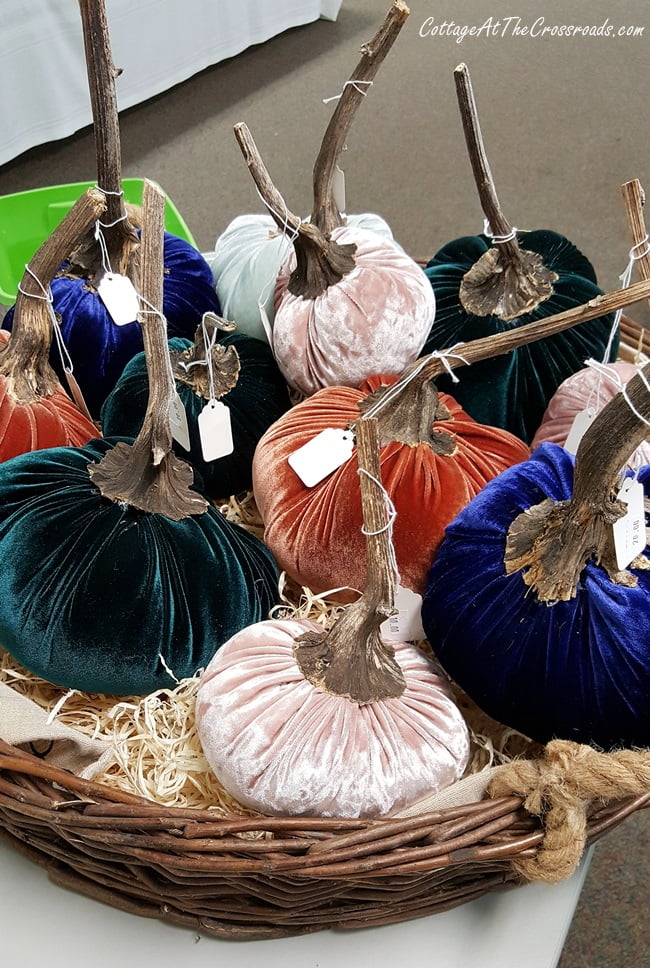 These are some of the pumpkins that we made.  You see, all 3 of us have fallen in love with velvet pumpkins so we thought that other people might buy them at our church’s bazaar which was this past Saturday. I think we made a total of 24 pumpkins in all. Just a few of them were not made of velvet, and those did not sell! I have to admit that I, along with everyone else, love the velvet ones best. 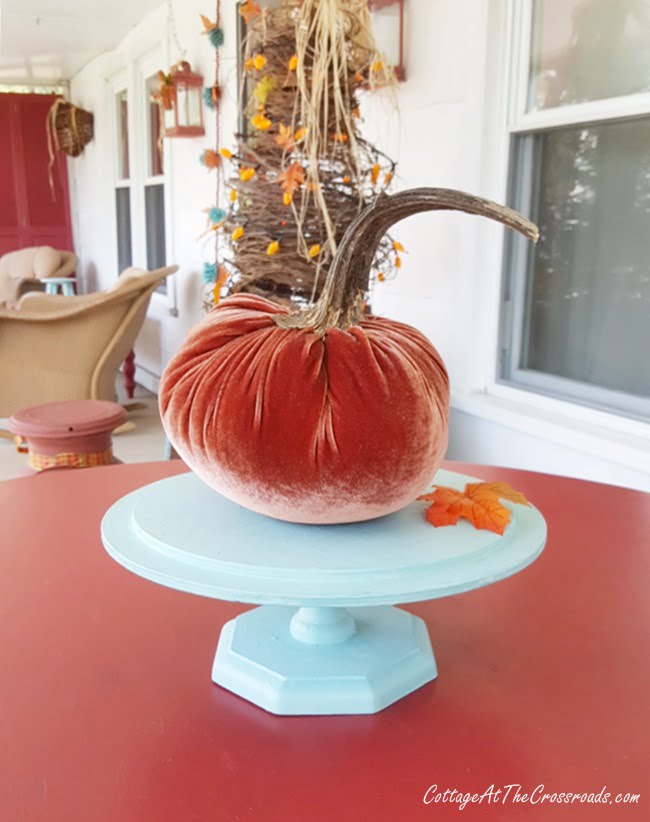 I got the idea to make the velvet pumpkins after seeing a video on Facebook. Do you follow our blog’s Facebook page? If not, click HERE. I really have not stopped long enough to write up a tutorial, but you can find the same video that I watched on Sarah’s blog 1915 House.

I ordered some (affiliate link) pretty silk rayon velvet in 3 different colors from Amazon. One of my sister-in-laws bought her velvet at Hobby Lobby.

Once you cut your circles out of your fabric, the velvet pumpkins are really easy to make. The hard part, though, is figuring out what you’re going to use for stems. 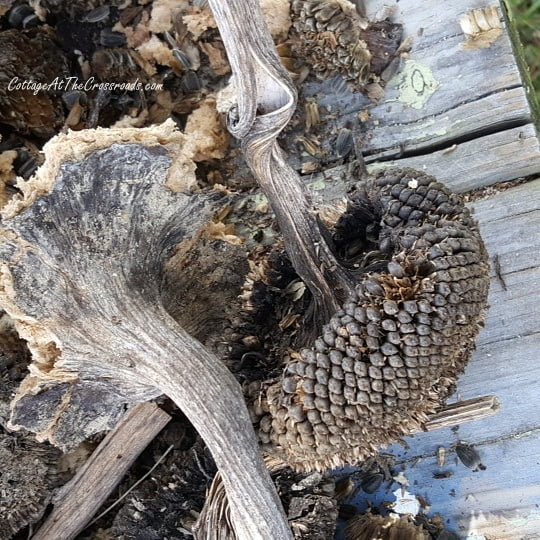 I cannot believe that I never have saved pumpkin stems from all the years we’ve grown pumpkins in our garden! There are places online where you can order real pumpkin stems but we really didn’t want to pay the price they were charging. So I was out in the garden a few weeks ago and looked down inside a raised bed where sunflowers grew this summer. There was 1 dead sunflower plant lying down in the bed and I looked at the seed head. EUREKA! It hit me that I could tear off the head and I would have a “pumpkin stem!”

It just so happens that Leo’s cousin grew a field of sunflowers this year so I called to ask if I could go in the field to gather some sunflowers. They said, “You know those flowers are dead, right?” Hehe! 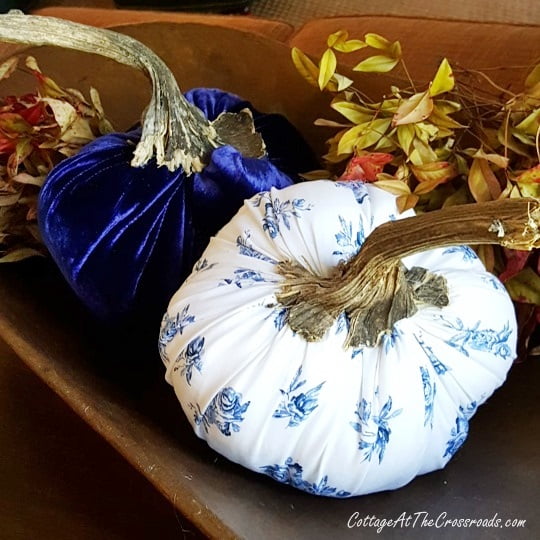 Now I will have to admit that it took a few hours to remove the seed heads from the sunflowers, and then the stems had to be trimmed and then hot-glued to the fabric pumpkins. But they worked perfectly! My sisters-in-law and I had a lot of fun making the pumpkins and most of them sold at the bazaar. 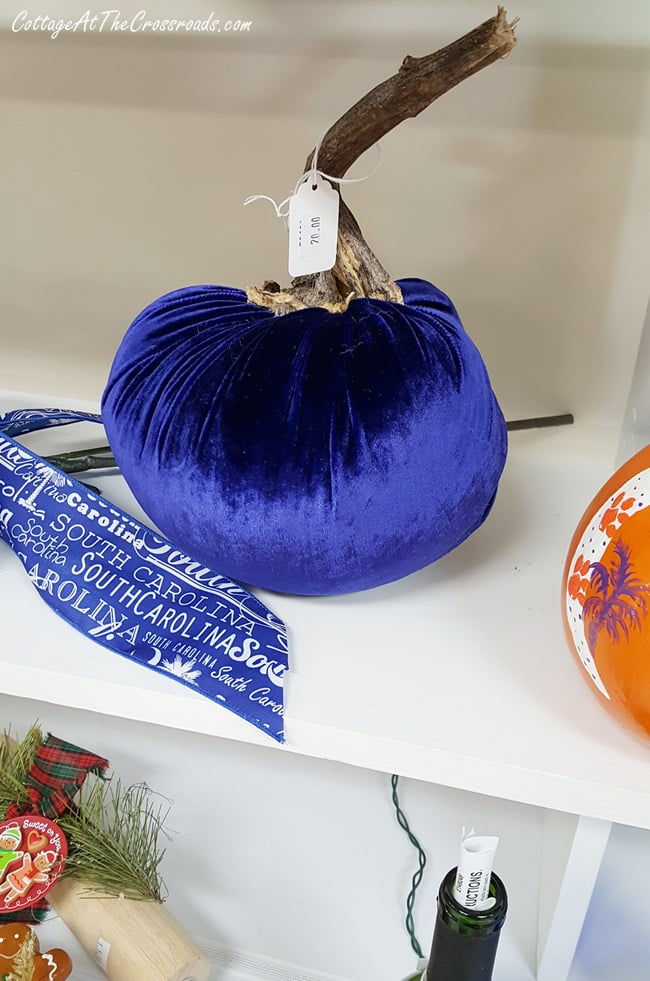 Here is one of the blue velvet pumpkins on a shelf at the bazaar. Our church is small, but it has the most amazing bazaar every 2 years. 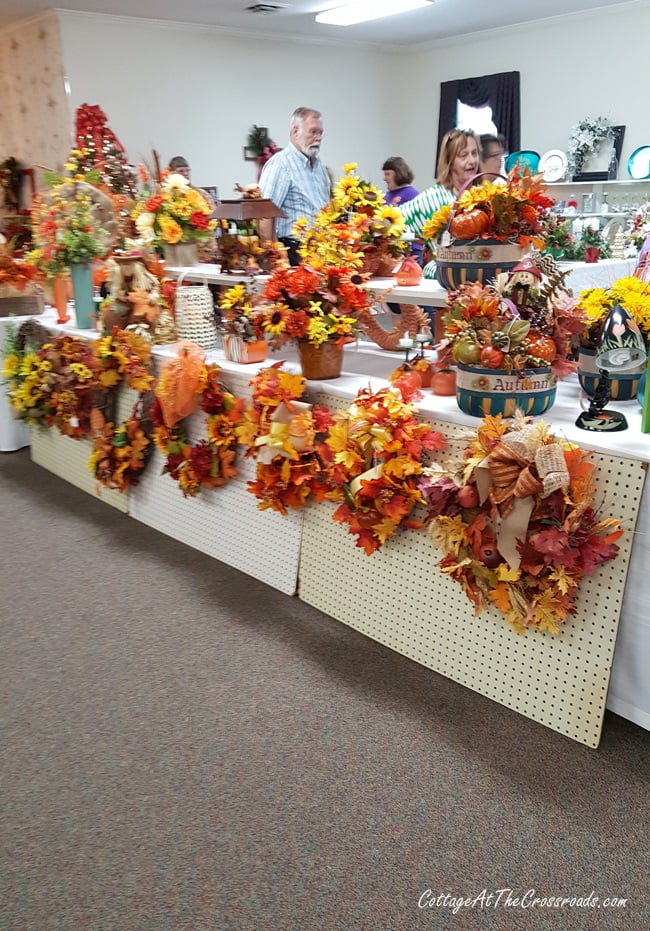 I’m sharing these photos that I took with my phone. There was a whole section of fall craft items. 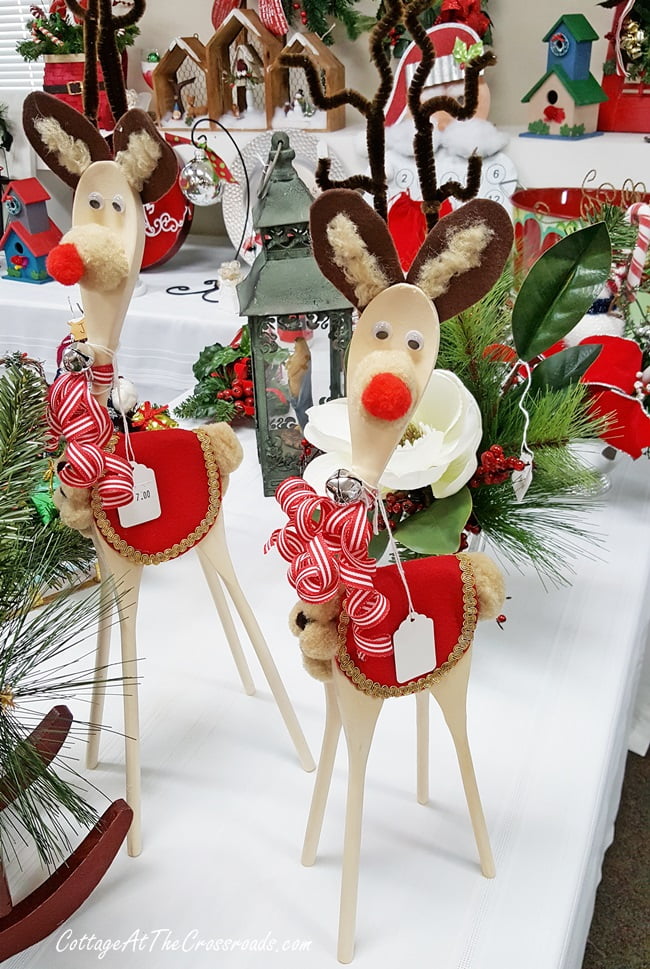 And another section has Christmas craft items including a Christmas tree loaded with handmade ornaments. Look at these deer made with wooden spoons! 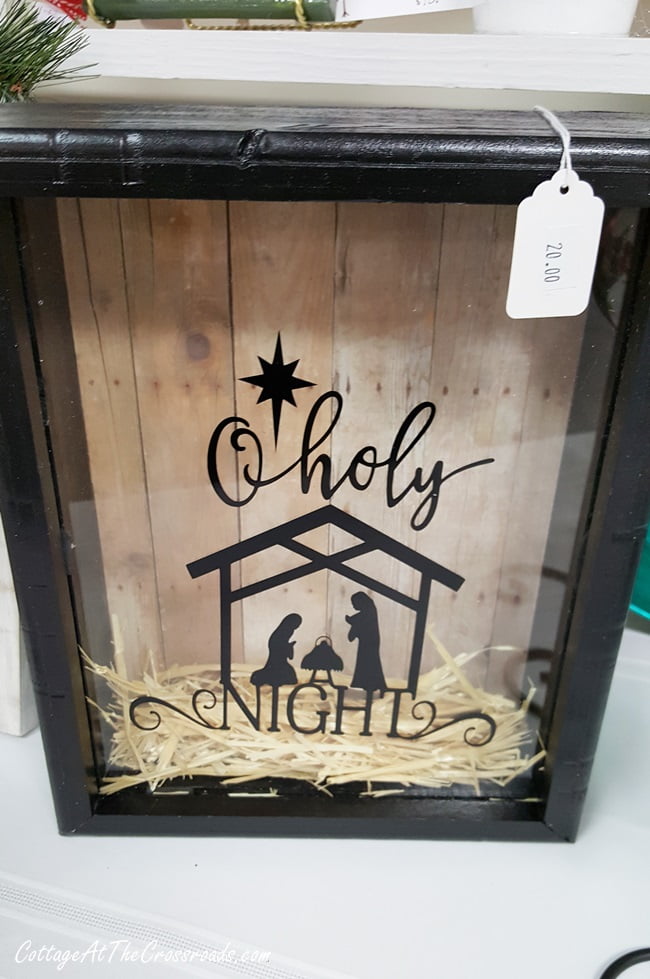 And look at this pretty Christmas scene. 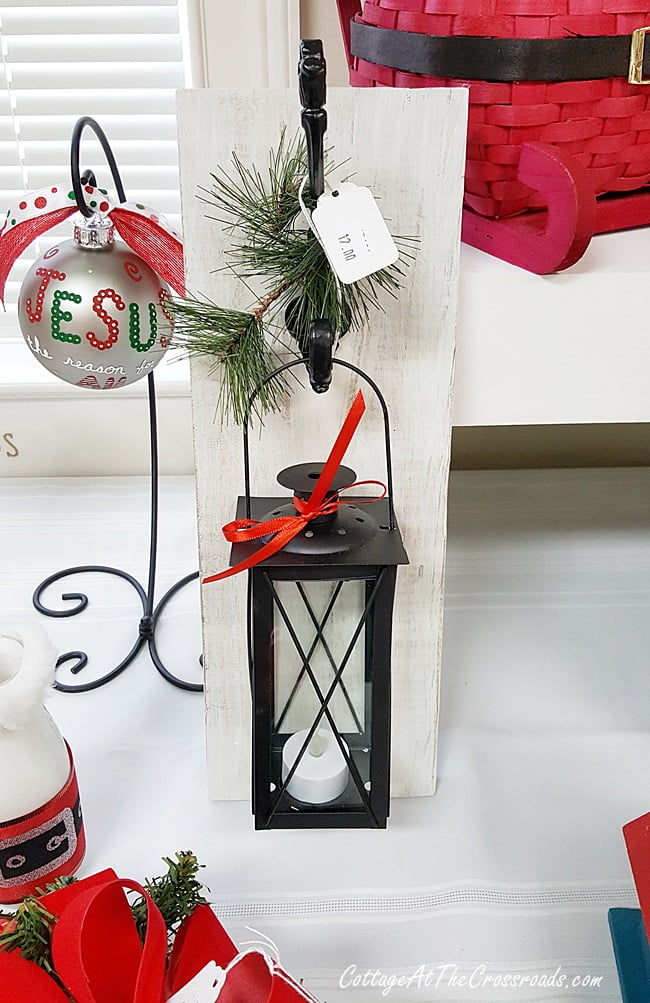 One of my sisters-in-law made 4 of these really cute hanging lanterns. 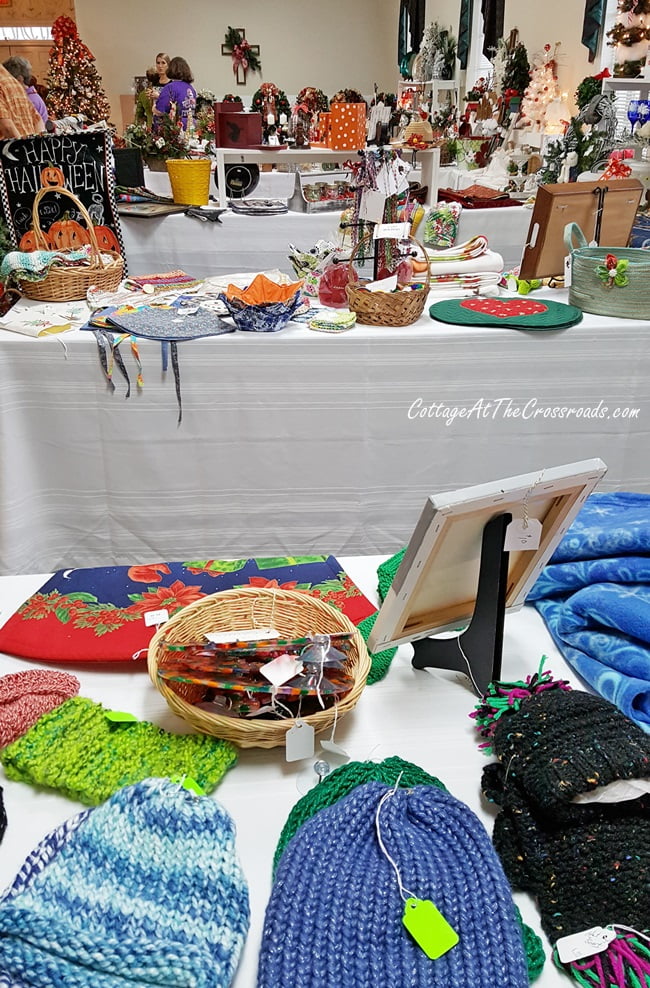 Table after table of handmade goodness! 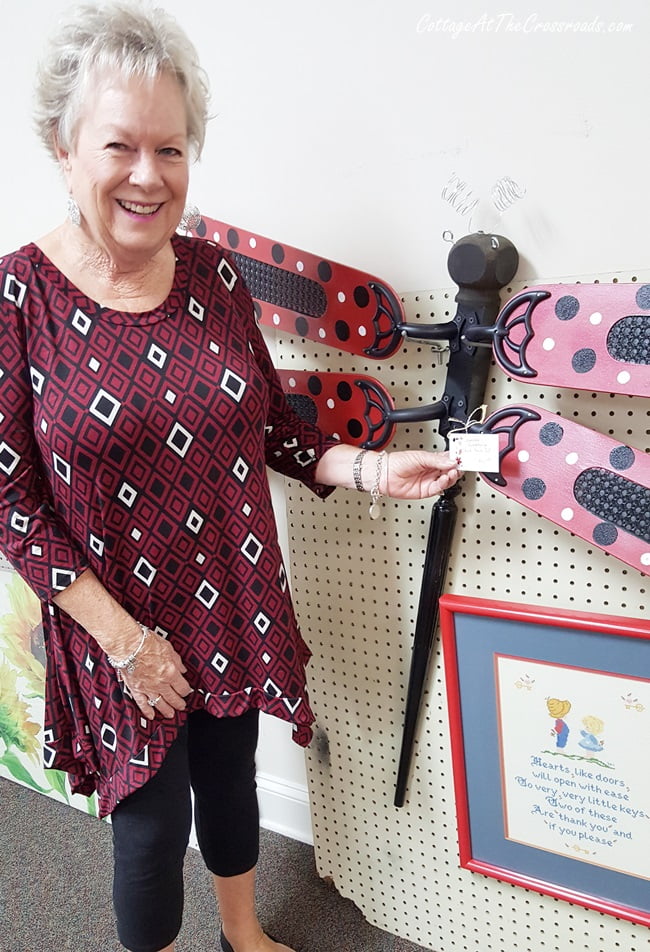 There were several of these dragonfly wall thingies made with ceiling fan blades, and they were fast sellers. Here is my sister-in-law Jean examining one that was painted in Gamecock colors. Note to self: I must make one of these to put on our garden fence next year. 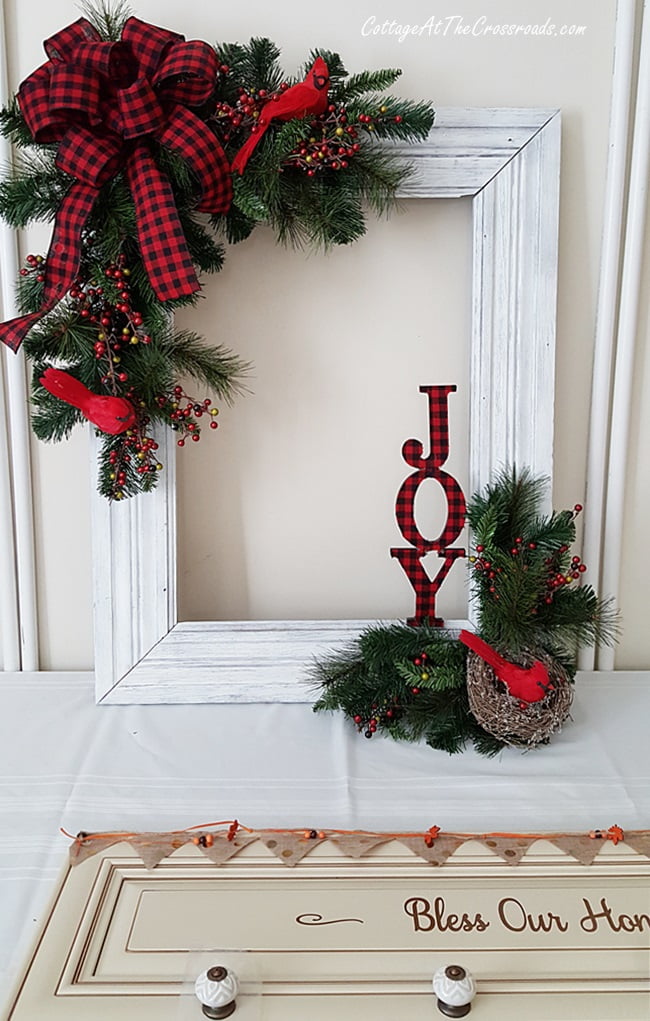 In addition to craft items, there was a silent auction. Here are 2 of the items that were up for auction. 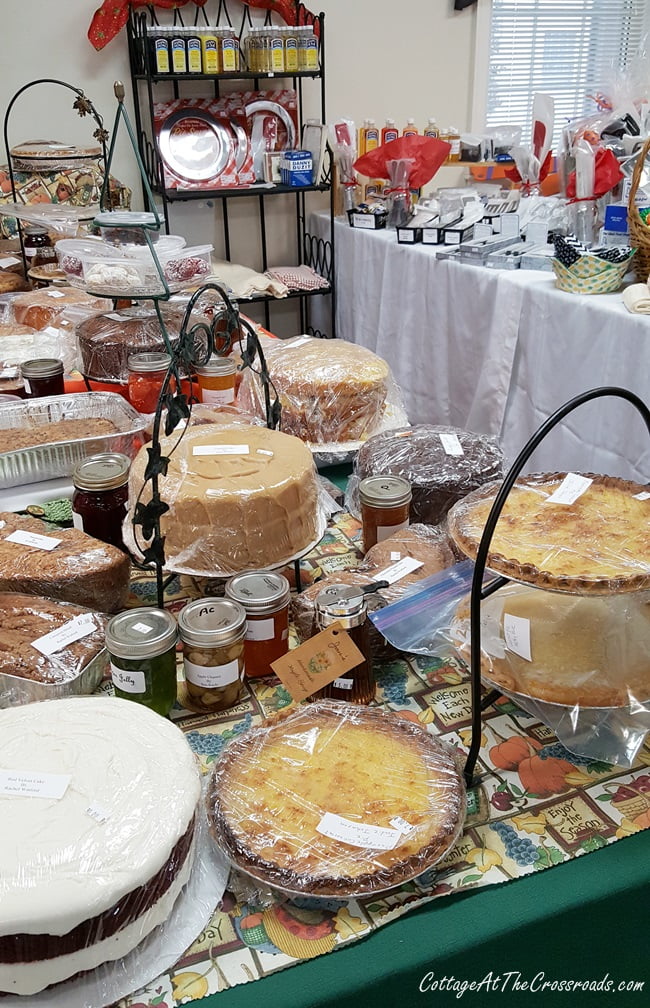 So many baked goods were for sale, and lunch was served as well. I contributed a huge pot of vegetable soup for the lunch. It was so heavy that Leo had to carry it in for me! I don’t have a photo but there was a frozen food section where people made and donated frozen casseroles. People stood  in line to purchase them because they know how good and convenient they are for working parents. 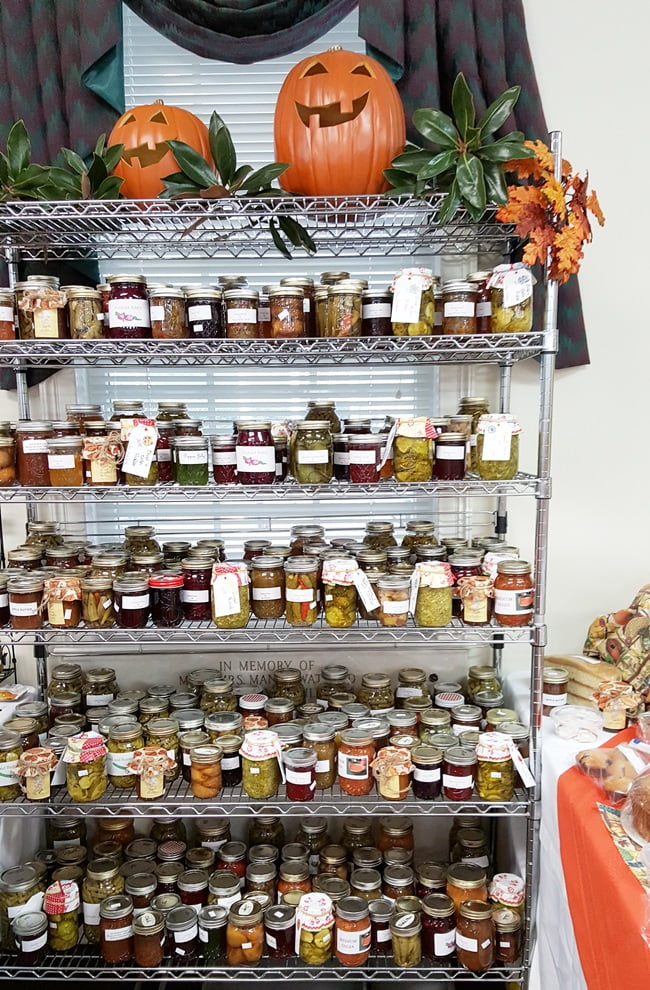 Lots and lots of delicious canned goods were donated as well. I came home with about 10 jars of fig preserves as requested by my mom. They are her favorite. 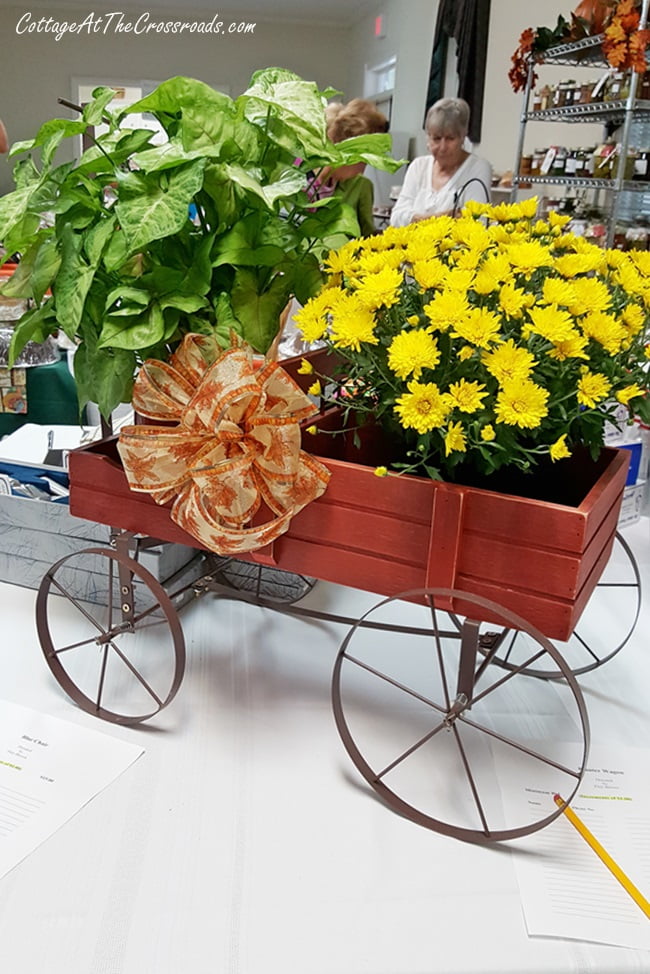 My other sister-in-law Jean bid on this planter buggy and won! Isn’t it the cutest thing?

Our bazaar was a huge success, and it was a wonderful day of fellowship and a chance to make new friends. Mark your calendars to make a trip to our town, Lamar SC, two years from now when we have our next bazaar!

And since I had a few of the blue pumpkins left over, I’m having a giveaway! One winner will have a choice of either a light blue velvet pumpkin, a dark blue velvet pumpkin, or a blue and white pumpkin. The giveaway is open to residents of the continental US only (due to shipping rates.) Just leave a comment on this post and we’ll draw a name this Saturday, Oct. 14.  Good luck!